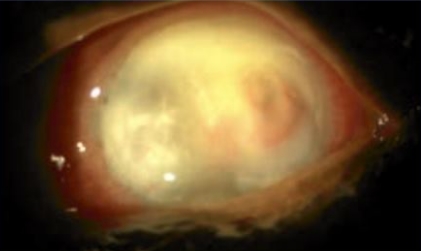 Fungal keratitis (keratomycosis), defined as fungal infection of the cornea, is associated with stromal infiltrate,epithelial ulcer, endothelial plaque or all of the above. The anterior chamber of the eye may be involved in more severe disease.

It is caused by filamentous fungi, yeast and dimorphic fungi. Unlike bacteria, fungi can penetrate the intact Descemet’s membrane and enter the anterior chamber, which is difficult to treat with anti fungal agents.Often, difficulty with prompt diagnosis, together with many patient factors, result in poor visual outcomes. The world of ophthalmology is in need of a clear gold standard of care in this visually devastating condition.

Fungal keratitis is primarily seen in tropical climates,probably due to the wind, higher temperatures and amount of rainfall. The incidence of fungal keratitis ranges between 6% and 67% of all microbial keratitis cases, depending on geographical location, and represents 30% to 40% of all cases of culture-positive infectious keratitis. In Australia, filamentous fungi accounted for 3% of corneal scrape results compared to 33% in India.

Moreover, fungi have replaced bacteria as the predominant cause of infectious keratitis in developing countries. In epidemiological meta-analyses the highest proportions of fungal infections were found in studies from India and Nepal.

The frequent use of ocular cortico steroids, and the increase in immuno compromised patients, have resulted in a rise in the incidence of fungal keratitis. Filamentous fungi are the major aetiological agents and Aspergillus species are the most common cause of fungal infection worldwide, especially in tropical climates, reported as 24%to 30% in some studies. Aspergillus is a ubiquitous filamentous fungus, commonly isolated from soil, plant debris and indoor and outdoor air. As with other filamentous fungi,most cases of Aspergillus keratitis have a history of trauma, particularly with vegetable matter.

In Cairo, increases in the frequency of fungal keratitis correlated significantly with rises in minimum temperature and the maximum atmospheric humidity, suggesting global climate change as an additional factor contributing to the increase of fungal keratitis worldwide.

Furthermore, it has been demonstrated that countries with low gross national income have higher proportions of fungal isolates.

However, these results maybe confound-ed by a larger proportion of lower-income countries having a tropical climate. A study evaluating the financial bur-den of keratitis upon a health system showed that fungal keratitis is second only to Acanthamoeba in terms of cost to treat.

In 35% to 50% of infectious keratitis no a etiology can be found.

Symptoms of fungal keratitis are often of prolonged duration (>2 weeks) and include blurred vision, pain,photo phobia, tearing, red eye, foreign body sensation and the report of a white spot in the eye. On examination, injected conjunctiva, corneal epithelial ulceration,corneal stromal infiltrate with feathery edges, satellite lesions, hypo pyon and/or possible adjacent scleritis are present. The lesions may be pigmented. Characteristics of intra ocular fungal invasion may include endothelialplaque, hypopyon, fungal web, and fungal ball in the anterior chamber.

The frequent use of ocular cortico steroids,and the increase in immuno compromised patients, have resulted in a rise in the incidence of fungal keratitis